Camp has always been home to staff members from all over the world. Over our history, we’ve had staff from England, Scotland, Wales, Ireland, Australia, New Zealand, Poland, Mexico, South Africa, Ukraine, and many other countries. HIC maintains a partnership with Camp America, an organization designed to match international students with roles in American camps.
This year, we were privileged to host our first counselor from Germany: Lars! Lars joined the HIC family from Munchweiler, a small village near the border of France. His background in engineering immediately stood out to us. Lars has even won awards for designing and 3D printing model cars! With the inauguration of our Counselor and Mentorship Program (which features a STEM component) we were excited to add him to our staff.
Lars became an instant sensation with both the kids and his fellow counselors. As a counselor of the Cheyenne, our oldest boys, he was often surrounded by campers copying his accent and asking him questions about Germany. The high point of Lars’ summer came when he was awarded “Actor of the Year” for his role as the villain in the Cheyenne’s Hollywood Premier film. When asked about his HIC experience, Lars said, “It was a great experience. I learned a lot about the American culture and the work with the kids was really fun.”
The fact that our campers were able to get a glimpse of the German culture through Lars’ presence was invaluable. Do you also want an authentic German experience? Join us at our Oktoberfest at the Black Forest Inn on Tuesday, September 25 at 6:00pm. Enjoy a German buffet, listen to live music, and bid on small tricky tray items, including Walt Disney World theme park tickets! For tickets to our Oktoberfest, visit https://www.happinessiscamping.org/oktoberfest-registration/ 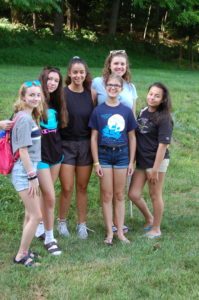